My wife and I had never been on an international hunting trip, but we wanted to go. We had traveled to Europe once. At the Arkansas Chapter Fundraiser at the Embassy Suites in Little Rock on April 5, 2014, we found our opportunity. Jacques Senekal had donated a 5 day South African safari for 2 hunters that included 4 animals. The hunt was valued at $8,900.

He was at the Fundraiser and was able to answer our questions. Included in the package were 2 impalas and 2 Blesbok as were the accommodations, meals, field transportation, PH services, along with trophy prep and delivery to a local taxidermist. Now it was up to me to be the high bidder on this hunt, and I WAS! I got a real bargain. I paid much less than the hunt was valued.

My wife, Karen, had never shot a rifle, much less hunted. Since she was to be a hunter on this trip, I had to teach her how to shoot. I took her to the rifle range and taught her to shoot my .270. 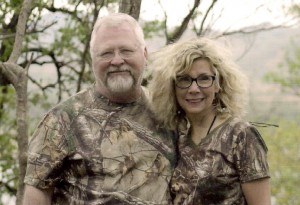 We left for South Africa on November 14 of this year for the five day hunt. We booked our flights with Delta Airlines for our first trip to Africa. The 16 hour flight from Atlanta to Johannesburg, South Africa was quite a stressful.

Our PH, Jan-Hendrik Liebenberg, met us at the O. R. Tambo International Airport and helped us with the luggage. It was 2 ½ hour drive to the main camp in the North-west Province. Jacques Senekal owns a 1,000 acre ranch where the main lodge is located. We hunted three different concessions. They varied in size from 3,500 to 5,500 and 10,000 acres.

On our first day of hunting, we drove to one of Jacques hunting concessions. I did not take my .270 to South Africa. I chose to borrow .300 Win. Mag. from Jacques. We took turns carrying the rifle on the stalks, and Karen was able to take a nice Impala ram with one shot the first afternoon. She had learned to shoot well back home, but using Jan’s shoulder for a rest was something different. She managed to get a scope in the eye in the process (she is fine). I shot my Blesbok that afternoon finishing day one. Jacques is an excellent host and our PH was a very skilled young man. 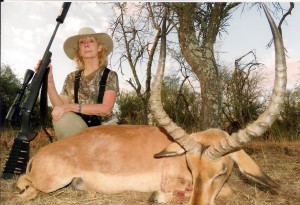 Karen Jones with her Impala

Day two was also productive as we were able to finish out our package animals. We realized prior to the hunt that we would be in South Africa during the hot season; however, the weather was moderate to somewhat chilly so we were fortunate in that respect. 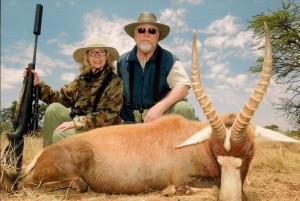 On day four Jan took us to Pilanesberg National Park, which is near Sun City. We were able to photograph a large number of animals including hippo, crock and rhino. The only animal I missed was the elephant.

On our last day afield, I managed to take a beautiful old blue wildebeest. Overall, we would highly rate this operation and would not hesitate to use them again and recommend them to others.

By the way, I am looking for a deer lease to join so if any of you have any ideas they would certainly be appreciated. I can be reached at gunrunner53@yahoo.com or 501-240-8404. 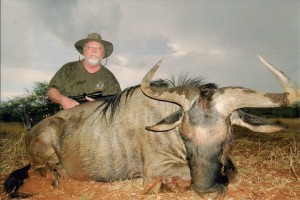