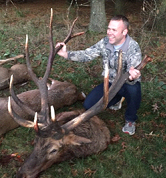 My name is Logan Brown, and I was blessed to be able to win the Arkansas Warrior hunt to Edenwood Ranch donated by the Arkansas Chapter of Safari Club International.  I truly appreciate the opportunity given to me to be able to hunt in an area where I could not realistically afford to hunt on my own.  I am an avid elk hunter and was exited to hear that Edenwood Ranch had great elk hunting opportunities.  I have only had the opportunity to hunt public ground in Colorado for elk and have only been able to harvest cow elk up to the time of my trip.   So I was really excited about having a good opportunity to take a bull elk.

I traveled with three SCI members from Little Rock to Edenwood Ranch in Wautoma Wisconsin.  On the trip with me were our driver, Gary Acord, our navigator, Bryan Fitzgerald, and our professional napper, Robert Williams.  It was about a 12 our trip so we broke our trip into two days.  We began our hunt on the evening of October 22, 2015.

The accommodations at Edenwood were first class, as were the meals that were prepared by the ranch chef.  All of the hosts worked extremely hard to make my hunt a good experience.  They allowed me to use my traditional archery equipment, as well as hunt on the ground using spot and stalk tactics.

On the evening of the 22nd I was almost able to get a shot at a beautiful bull elk, but the elk was in an area that was too thick for an ethical shot.  The next morning I was able to call a 7×7 bull in to about 44 yards but that was beyond my limits with my longbow.  I was unable to kill an elk that day but I had a great time looking at all the beautiful animals on the ranch.

The next day was quite rainy and that morning I didn’t have much luck, but my guide who happened to also be the owner, offered to go back out immediately after lunch.  We did not have any luck where we went at first, so we decided to go back to the area where we had seen the bull the first evening and attempt to locate him again.  We were able to find him and get well within my affective range. I was able to get an arrow in the bull.  However I did not make a good shot.  I decided to go back and get a rifle to take during the tracking of the bull.  We were able to find the bull, and I finish him off with the rifle.

We traveled home the following day, October 26, 2015.  We drove straight through this time and the driver, navigator, and the napper all performed their jobs flawlessly.  I cannot express my thanks enough to the Arkansas Chapter of SCI and to Gary, Bryan, and Robert for the hospitality that has been shown to me.  I enjoyed the hunt very much, but I know that I enjoyed the fellowship with a great group of guys just as much if not more.