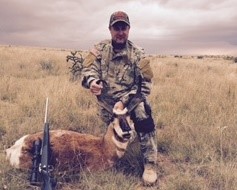 The hunt was an incredible experience. The day prior we scouted the area to get a good idea of what we could expect. The weather was perfect. Sunshine, mild temps and what appeared to be an abundance of antelope. The next day was a different story. The temperatures dropped and the sunshine was replaced with cloudy skies and scattered showers. There had been a mass exodus of antelope to some unknown location. We had a 3 ½ hour dry spell – not seeing anything but Quail.

The comradery – also known as BS – was as thick as the tumble weeds and rattle snakes – and bit just as hard. But it all brought on recurring bouts of laughter. Our guide, Bryce, who was quick to provide ample “comradery”, took us to an area that I am sure he had held as last resort. We spotted what looked to be a keeper. The buck had been pushing and pulling no less than four females and was on the run&hellip

I was up&hellipIt was time to shut up and shoot. From 325 yards, while fighting thru brush, grass and barbed wire, I laid into the stock, got a good sight picture and squeezed off the shot. Any anxiety about snake bite or worse—missing, was quickly replaced with Whoops and Hollers from the group as the buck dropped like a rock. The congratulations and “Holy Crap” You Got Em”!!! Echoed along the New Mexico Mesa’s. Shortly thereafter we headed down to find the buck. This was my first antelope and it turned out to be a great one.

It was an incredible day that had to end, but oh what an ending. My thanks to Gary, Greg, Ed, Bryce, SCI and all those in the Southern New Mexico Chapter that did so much and were so incredibly great at putting this day together. I can’t THANK YOU enough. You are all, every last one of ya – outstanding Americans and I am thankful to say – new and great FRIENDS.