In early 1991 I began planning our second African Safari. I was looking for a low fence hunt in Zimbabwe. Charlie Craver recommended George Parkin with Matabele Hunters. I contacted George and booked a 14-day hunt. At the 1992 Dallas Safari Show, we met with our friends, David, and Nancy Theis, as they were booking a 14-day safari with Boer Cortzee in South Africa. They were including a trip to Kruger National Park before their hunt. I had just taken early retirement from Southwestern Bell and had plenty of time. I asked if we could join them for the first week of their trip and go to Kruger. They agreed. I booked a 7-day safari with Boer starting May 23, 1992.

The excitement started early. We were to fly TWA from Little Rock to New York JFK via St. Louis arriving at 4:55pm. In New York we were to board South African Air at 6:30pm. The TWA flight was canceled due to mechanical problems. How do we get to New York? We flew United Air to New York via Charlotte arriving at 6:00pm. We nervously waited for our luggage and ran with our cart to the next terminal. Too late. Our South African Air flight had completed its security check and locked up.

We went back to the United desk for help. They said our schedule was not proper, and they could not help us. We went to TWA. They said they did not bring us to New York, and they could not help us. We went back to United and begged. They said if we could get South African Air to release the tickets they would try and help. Nancy and I went back to the South African Air terminal to get their release. To our surprise, our plane was still on the tarmac. They said that they could get us on the plane but not our luggage. We ran back to get Marilynn, David, Jordan, and our luggage. They took our luggage and took us to an upstairs waiting room. After an hour or so, they told us our luggage was on the airplane. Around 9:30pm they took us to the plane. They were out of drinks, and the passengers were out of patience. I loudly thanked them for waiting for us. They were not impressed

Boer met our plane and took us to his home in Vaalwater. The next day we headed to Kruger Park. It was an interesting drive. 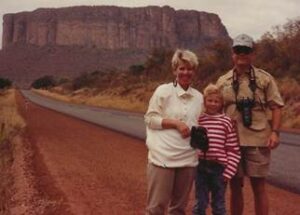 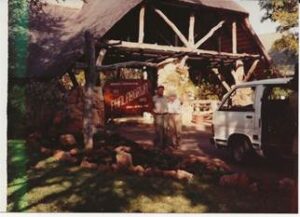 Boer made reservations for a three-bedroom chalet at the new Mopani Lodge in Kruger Park. There was a large water hole just outside the lodge fence where animals would come to drink. We were free to drive though out the park. We were to stay inside the car and be back to the lodge by night. 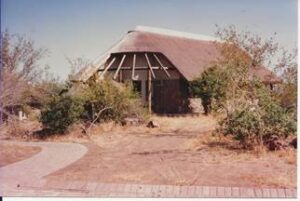 Although you should stay in your vehicle, there was a rest stop with restrooms where you could get out. Next to the rest stop there was a deep ravine maybe 25 feet deep. Standing on the rim of the ravine, we could see a bull elephant, a hippo, and a crock. We thought we were safe until we walked along the rim. That is when we saw elephant tracks coming up. The elephant got tired of us, waved his ears, and made of false charge. Marilynn screamed and ran for the vehicle swinging her camera wildly in the air. I hurried there as well. 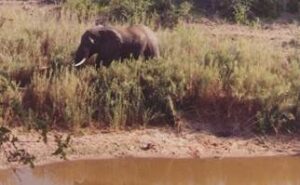 We had a fantastic time driving though Kruger National Park. It is huge. You can see many animals, some remarkably close. We could not resist feeding the baboons. 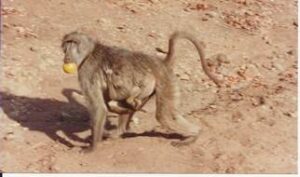 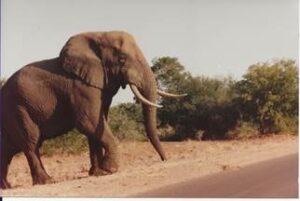 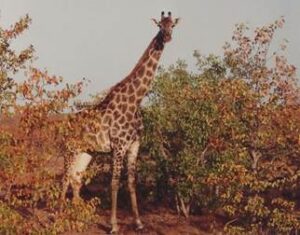 Sadly, we left Kruger and drove to Hluhluwe. It was another scenic drive. At a viewing pull out, we met Elvis of South Africa.

There is thick cover and mountains in the area around Hluhluwe. It was in a deep secluded valley near Hluhluwe that South Africa found the last surviving White Rhino. They created the Hluhluwe National Park to protect the survivors. All the White Rhino today, came from this heard. Marilynn, Nancy, and Jordan borrowed a car and toured the park. At one point they were met with a roadblock.

David and I came to this area for Nyala. David hunted with Boer, and I hunted with his son, Kan. They told us that their last clients had taken Nyala in the 28-29-inch range. Naturally, we raised our expectations to that level. The first day Kan and I walked into the bush about 400 yards from the road to a manmade water hole. As we approach the water hole, we saw a giant lizard. I do not remember what it was called, but it was about four foot long.

As we drove out that evening, we saw a big Common Reedbuck. This was not on my wish list, but it was very impressive. David thought so too. He shot it the next morning. I found a Nyala the same morning. I was not sure of its size. A voice behind me, said “Big Nyala, Shoot”, so I did. It was a nice Nyala, but not as nice as the previous clients had taken. Kan denied telling me to shoot.

We cut a trail to the road, carried out our animal and waited for Boer to pick us up. On the way back to camp, Boer spotted a Nyala for David. They slipped out of the vehicle and made a stalk. When we heard the shot, we went to see David’s Nyala. Like mine, David’s Nyala was not as nice as the previous clients either. I came to 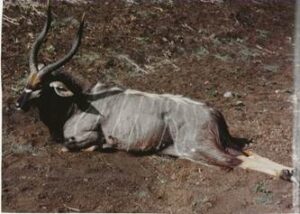 While David and I were hunting animals, Marilynn and Nancy were doing their own hunting for souvenirs. 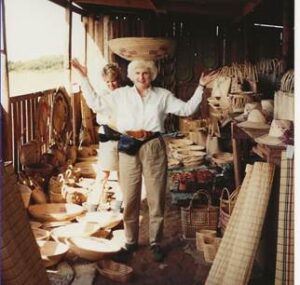 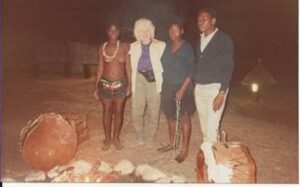 Bore took us to the Zulu Safari lodge one night. We walked through the entrance into the courtyard beyond. The young Zulu girl dancers were huddled around a campfire. As we approached they stood up and removed their sweaters. Nancy’s nine-year-old son got an education. The Zulu dancers at the Safari Lodge in Hluhluwe may have been the high light of the trip for Jordan

The next day we drove into the Orange Free State. This Province is mostly open plains where you find Springbok, Blesbok and Black Wildebeest. We stayed in Ermelo and hunted a ranch nearby. At the time, I was the only shooter, and I was after the Black Wildebeest. When we drove onto the ranch, the Wildebeest knew the drill and ran. Running is natural with them. That is what they do. Long shots at a moving target are not what I do best. It was ugly, but I got my Wildebeest. 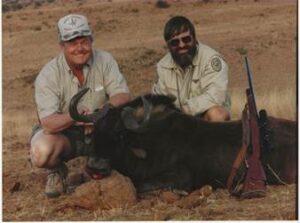 David proved it was not my rifle’s fault. Springbuck and Blesbok were on his wish list, and they were on this ranch as well. He used my 7mm to shoot both with one shot each.

The next day we left our old and new friends. Boer and Kan took David and Nancy to his Baltimore Camp to continue their hunt. Boer’s daughter drove Marilynn and me to Joberg to catch our plane to Zimbabwe. On the way she took Marilynn to an African specialty shop. BIG PROBLEM! Either Marilynn stayed too long, or Boer’s daughter drove too slowly. We missed our plane.

We checked into the Airport Holiday Inn for the night. I called George Parkin to tell him we would arrive the next day. I went to the bar. Surprise! I found Rick Russel and Larry Dyer, friends from our SCI Chapter, in the bar. I told them about missing our flight to Zimbabwe. After a couple of drinks, I was feeling better.

The next day we caught a flight to Bulawayo to hunt with George Parkin. Nancy, Jordan, and David Theis continued their hunt in South Africa with Bore Coetzee. Nancy and David have been one of our favorite travelling partners for the past 28 years.