My wife, Marilynn, and I usually go to the SCI Convention each year even if we are not looking for a hunt.  It is a time to meet and visit with our hunting friends from faraway places.  It is a time for reminiscing with the outfitters that we have hunted with in the past.  This was the case in 2012 as we went to Las Vegas.

By noon Saturday my feet were hurting, and I needed a place to rest.  What better place to go than the Day Auction.  I could set down and enjoy a free beer!  I would entertain myself by following the auction.

There were many outstanding hunts, works of art and firearms in the auction.  Some would sell at or near the donor’s value.  Others appeared to be great values.  I found myself looking ahead to see what was coming.  Of course, there were many that were of no interest, and I marked those off.  Others caught my attention and I highlighted them.  I had another free beer.

One of these hunts of interest was a 5 day Austrian hunt for chamois and roebuck for one hunter and one observer.  The hunt was donated by Lowveld Hunters.  My wife has wanted to travel to Austria and Switzerland.  I have taken six red stags in six different countries.  The European red deer is the largest of all red deer, and Austria has some of the best.  I would really like have a big European red stag.  I entered the bidding, but I got out bid for this hunt.  I went a got another free beer.

Five pages later in the “Day Auction Catalog”, I found another 5 day Austrian hunt for a fallow deer for two hunters and two observers.  This hunt was donated by Lowveld Hunters, as well.  The hunt would be on the famous estate hunting grounds of Punitzwald, in Burgenland near the Hungarian border.  It is part of 6,400 acre hunting reserve.  I was determined to not be out bid this time.  I wasn’t- I bought the hunt!  I was off to tell my wife about my great find.

The hunt had to be taken on open date during September – December 2012.  I contacted Martin Neuper to inform him that I had bought his donated hunt of five days for two hunters and two observers for fallow deer.  I told him that I wanted to hunt the European Red Stag as well.  I asked about open dates for October 7 to 13, 2012.  He stated that those dates were open and were perfect since this is the rutting season for the red stag.  The weather will be nice.  They will be far away from freezing temperatures.

Now I needed to make another great “find”, another hunter and observer.  I had bought a hunt for two hunters and two observers.  We contacted our good friends David and Nancy Theis.  We have made several international hunting and fishing trips with them over the past 20 years.  They have traveled Austria and Switzerland before and would be a big asset for this trip. 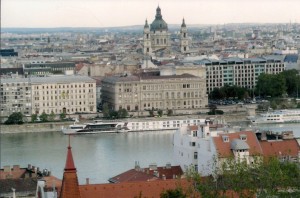 They agreed.  We were to meet at the airport in Vienna on Sunday October 7, 2012, rent a car and drive to the Krutzler Hotel.  I contacted Martin to give him our travel plans and the name of our friends.  He told me that his brother-in-law and partner, Toni Fuerst, would be our guide.

Marilynn and I arrived in Vienna via Iberia Air at 11:40 am.  David and Nancy picked us up in our rented Ford SUV. After placing our luggage in the rear, we punch in the address of our hotel in the GPS and were off!  It was a team effort in a strange country to follow the GPS, read road signs and help David deliver us to the Krutzler Hotel.

It was a beautiful two hour drive from Vienna to Guessing.  The scenery in this part of Austria is magnificent – rolling hills with a mixture of bright green pastures, farm land and timber land.  In the timber at the edge of the fields you could see hunting blinds.  The autumn colors were at their peak! 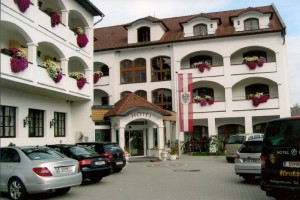 Toni met us at the hotel that evening and explained how the hunt would be conducted.  He offered me a choice of several rifles to use.  I chose a Remington 700 in a 300 WSM with a Zeiss Scope.  He said that he would pick us up at 5:45 am in the morning.

The hotel was still asleep when David and I met in the hotel lobby.  Toni arrived on schedule, and we loaded up.  It was a short drive from the hotel, about 10 minutes of paved road before went turned onto a gravel road and entered the timber.  It was a typical narrow logging road.  After about 20 minutes into the timber, Toni parked the truck, and we unloaded.  It was rather cold as we walked to the hunting blind.

The blind was to the right of the road in the tree line bordering a green pasture.  David and I sat on a wooden bench with Toni resting on the back of the blind.  We heard a loud noise from behind us that I had never heard.   It was not the roar of the red stag.  Toni whispered “fallow deer”.  David said that it sounded like a lion’s roar to him.  It was still too dark to see anything.  We could hear fallow deer every few minutes, mostly from our left.  As dawn approached we could hear the red stag roar far away to our right-front.

The field in front was about 125 yards across and continued a few hundred yards to our left and to our right.  To our right the field opened into a very large pasture.  A little after 7:00 am, David spotted movement from the large pasture to our right.  With my 8 X 32 Swarovski binoculars, I could see a nice fallow stag working his way toward us.  When he got closer, Toni confirmed that it was a good fallow stag, and I should take it.  One shot and the stag was down for good. 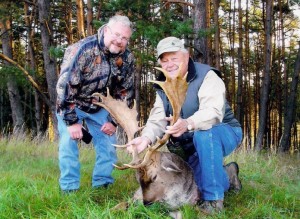 Toni described the Austrian tradition of placing a pine bough in the mouth of the stag and in the hat of the hunter.  After taking pictures, we retreated to the hunting lodge on the property, and Toni treated us to another Austrian tradition-Gurktaler schnapps. 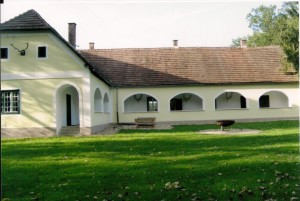 David and I returned to the hotel to catch up with the girls.  We joined them on a tour of Guessing.  Guessing, a major town in south Burgenland, is the first community in the European Union to produce its whole energy demand – electricity, heating/cooling, fuels – out of renewable resources from within the region.  However, to appreciate the enormity of this achievement, you need to rewind and go back to 1988 when Guessing was one of the poorest areas of Austria.  Then, the community relied on agriculture, with farmers selling corn, sunflower oil and timber to make a living.  While in terms of tourism, the main/only attraction was a 12th-century castle built by Hungarian nobles.  At the time, the town was said to be hardly able to afford its annual 6 million euro fuel bill.

In the early 1990s, a policy was proposed which called for a complete abandonment of fossil-fuel-based energy.  The renewable-energy project has brought in 50 new enterprises into the city.  As a side effect, extra income is being brought into town through eco-tourism.

That afternoon everyone went to the hunting lodge.  David and I walked to a blind on the eastern edge of the large pasture.  Toni arranged for another guide, Peter, to take Marilynn and Nancy game viewing.  They saw red stags, fallow stags and wild boar.  We saw red deer, fallow deer, sika deer and moufflon rams, but nothing larger than I had taken elsewhere.  The evening meal was prepared and served in the hunting lodge.

Toni and I returned to the hunting lodge the next morning.  We drove several hundred yards north of where we had hunted the evening before and walked the last few hundred yards to the blind.  We were at the north eastern edge of the large pasture.  The field in front of the blind was about 100 yards across and continued to our right for several hundred yards.  We heard the same roars as we did the first morning, but today we were much closer to the red stag roar.  Toni said that Peter had seen on old stag in this area recently.  Through the morning fog we could see lesser stags crossing the other end of the large pasture.

Toni spotted a large stag walking slowly along the timberline across the field to the far right.  I picked up my binoculars and saw this huge stag, the largest that I have seen while hunting.  It continued walking, getting ever closer.  I raised the Remington and watched as the stag came closer.  The stag was still walking as I squeezed the trigger.  I heard the bullet strike.  Toni said “shoot again; I think you hit a little too far back”.  The second shot put him down.

We waited a few minutes before walking out to inspect this magnificent animal.  As it turned out, both shots were properly placed behind the shoulder.  This old fighter had broken points on both sides, but still a great trophy.  By now I had acquired a real Austrian hunting hat for today’s hunt and picture taking.  Back at the hunting lodge we continued the tradition by celebrating with Gurktaler schnapps. 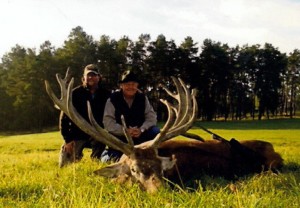 We returned to the hotel in time for me to join the rest of our party for a sightseeing trip to Graz.  We told Toni that we wanted to go to Budapest, Hungary the next day.  That night we had dinner at the hunting lodge.  Toni informed us that he had found an interpreter to accompany us to Budapest.  This was much more than we had expected.

Our hotel was only two miles from the Hungarian border and a 20 minute drive to a town with train service to Budapest. 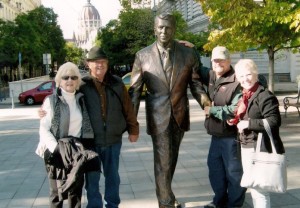 The hunt was conducted with FN Hunters (a family business) that hunts in Austria and Hungary.   Anton

My wife and I had a wonderful time.  I would highly recommend this company.  They may be contacted as follows: