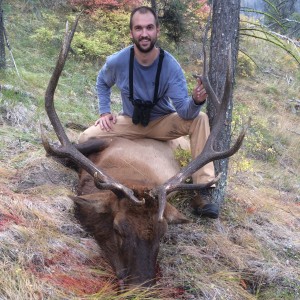 Jonnathan and his Elk

Everybody loves it when a plan comes together. I am the father of two daughters. My son-in-law, Jonnathan, had no father figure from the time he was 9 years old until he married my daughter. At that point, the planets aligned for the two of us as I introduced him to camo, rifles, shooting and big game hunting and we became dear friends. In the early stages of this transformation our game included coyotes, squirrels, bobcats and whitetail deer. Luck tended to be on our side. For example, on our first coyote hunt, three yodel dogs came to the call…Jonnathan shot the biggest one and the other two exited quickly; however we yelped like wounded pups and both coyotes returned only to be laid waste on a double whammy by yours truly and Jonnathan. Even the day Jonnathan shot his first buck deer was magical. Again, two animals (bucks) appeared at 120 yards for us as we sat together in a ground stand. At a count of one, two, three we dispatched both bucks for the meat pole simultaneously.

As our hunting adventures continued, I one day questioned Jonnathan regarding his “dream hunt”. Having heard about my own wilderness elk hunts in Idaho he quickly responded that an elk hunt in The Frank Church Wilderness Area of Idaho would be his choice. Knowing that both my age and weight were creeping up, I decided sooner rather than later would be the best idea for such an event. Very quickly this hunt moved to the top of my bucket list: to be with Jonnathan as he downed his first bull elk. That was 2007. The recession “encouraged” me to wait to book our hunt until 2013 for the following year. As all of you know, the anticipation is a good bit of fun and that was certainly the case for us.

Finally September of 2014 rolled around and our road trip to Idaho began. The first day of driving took us to Cheyenne, WY. The second took us into Jackson, WY, a place that Jonnathan had never visited, but I knew he would love. We both enjoyed good food and beverage on our overnight there and some great sight-seeing (Grand Tetons and wild game!). Then the third day of travel found us in our destination town of Challis, ID, and we had the wonderful pleasure of being invited to Steve Zittel’s (our outfitter and guide) home for elk steaks the night before our launch into The Frank. Early the next morning we boarded a Cessna 206 and had a smooth forty-five minute flight into a remote landing strip. Wasting no time at all, we loaded our guns, grabbed our bag lunches, mounted our horse/mule, and headed up, up, up.

It was only three hours into our ride toward camp before we heard the mighty bugle of a herd bull. Steve bailed from his saddle immediately and motioned for us to follow suit. Steve and the bull exchanged a few challenges then silence, so Steve told us to grab our lunches and eat. We were to watch and listen closely while eating and glassing as we had yet to spot any elk. Just about the time everyone stood after lunch, I spotted a few cows and a calf. Steve had already seen them as well, but when one of the cows bedded down Steve said “let’s go”. He knew the bull was somewhere around those cows and if they were bedding down it was time for a [the] stalk.

My ego says to leave this part out of the story, BUT…I started on the stalk with Jonnathan and Steve but after a short distance my lack of conditioning showed itself and Steve sent me back. Bummer. The good news is I had an excellent vantage point from which to listen to a single rifle report about an hour later.

The two fittest men in our party had arrived on the adjacent mountaintop and found the bedded cows in their binoculars. After some time glassing, the herd bull was seen chasing a hot cow in and out of the timber. Steve told Jonnathan to get ready and drill the bull the next time he came out of the timber and presented a shot. Jonnathan, a quick learner, got into a comfortable shooting position and when the bull gave him a broadside opportunity, he showed his excellent rifle skills by sending a single Barnes X bullet through a gorgeous 6×6 bull. At the shot, I listened for a follow-up, but none needed. About twenty minutes later I heard a very gratifying “whoop” from the timber and knew Jonnathan had struck gold.

The bull was a very nice, chocolate-horned herd bull that any elk hunter would be proud of, but I was especially pleased. I was overly happy for all involved and extremely proud of both hunter and guide.

We were not even to camp yet and I had a checkmark on my bucket list…Jonnathan and big bull elk! What revealed itself over the next seven days as we roamed the steep mountains of The Frank was the true mettle of my son-in-law. He did not slack off in his attentiveness to any aspect of our continuing adventure even though he had achieved objective numero uno. In fact, he was so intent on excelling as a member of camp and hunter that Steve uttered these words directly to him once we returned to Challis: “Jonnathan, you are the most thankful, appreciative, wonderful young man I have ever known and if either of my own two sons turn out to be like you I will consider it a success!” Steve is not a “soft sort” so these words were even more impactful and meaningful to both Jonnathan and I. With my bucket list having been quenched early on in this hunt, these words from Steve were beyond icing on the cake and more. Jonnathan had “conquered” The Frank in the finest fashion!