Have you ever seen a prairie dog explode? That’s what happens when he is hit with a 3600 feet per second bullet. The New Mexico sun was heating up and the hotter it got the more active the prairie dogs became. My first prairie dog hunt was in 1986. We didn’t know much about shooting prairie dogs, we just knew we had wanted to shoot some for a long time. Our equipment consisted of what was considered, varmint guns, .222 Rem. Mag. (duce Mag.), 220 Swift and .243 Win., with an 8x or 10x scopes. After the first few shots, we knew we were optically under powered. The close dogs would head for their mounds. After that, the dogs were too far out for our optics.

That was the start of a long learning process, needed to become a serious dog hunter. About this same time, I was getting into bench-rest shooting. Both were great learning experiences. In bench-rest shooting you learn a lot about wind drift, trigger pull and how to properly clean a rifle barrel. All of these are very important in dog hunting also. Without saying, in bench-rest shooting, you need a very accurate rifle. I started with a Remington 40x in a 22BR (bench-rest) that I picked up at a very good price. I used the 40x while I was waiting for a true custom competition gun to be built in a 6mm BR. Both guns are now in my prairie dog gun arsenal. Over the years I acquired a heavy barrel Rem.700 in 22-250 and later I added another Rem.700 in 22-250 and had Kerry O’Day re- chamber it for 22-250 Ackley Improve.

I started hand loading all of my ammunition over fifty years ago. Back then you were limited on the bullet choices and quality of commercial ammo. In competition shooting you have to load your ammo at the event in between relays and it has to be accurate and if you shoot prairie dogs you also need accurate ammo and lots of it. By hand loading you can determine the best and most accurate load for each rifle. Also, it was a lot cheaper to reload. Today the commercial ammo available is far superior to the ammo of 25 years ago but I still load my own ammo. To me it’s like a fly fisherman tying his on flies, he knows what works and doesn’t work. 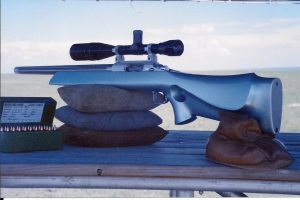 Over the next few years our prairie dog equipment evolved into accurate rifles with heavy barrels, light triggers and most of all, big scopes with a minimum of 20x. We hunted in New Mexico, Colorado, and the Texas Panhandle, where- ever we could find a dog town. On our hunts, we also took time to find new locations for future hunts. We followed up on every lead. Most ranchers and land owners would welcome you to shoot the dogs off their land. One land owner took us out for a steak dinner one night. We hunted some of the dog towns for several years. One year, there was a dog town that we shot on for five straight days and we couldn’t see that we made much of a decrease in the population and we were killing a dog with almost every shot. The following year, plague went through the colony and killed all of them.

We would keep track of how many dogs we killed, by putting the brass back in the box with the open end up for a miss and the primer up for a kill. We liked to go on Memorial Day weekend, the holiday gave us an extra day to hunt and by then all of the pups were out running around. One of the tricks we learned, when we first set up on a dog town, we would locate the old mature dogs and try to take them out first. If you kill the old dogs first, the young ones didn’t know what is going on and would stay above ground. If you missed the old dog, they would go in their holes and take the young ones with them. This system worked great. On one shoot, after taking out the two old dogs, I killed 18 pups on one mound. Another thing we tried to do was to get doubles. Let two or more dogs line up or stand next to each other and kill two or more dogs with one shot.

My buddy, Jerry, came up with one of the best ideas. He bought a small used trailer, outfitted it with a picnic type table to shoot from and a frame made of electric conduit pipe for a tarp roof for shade. It was about 20 degrees cooler under that top. It had compartments for sand bags, ice chest and water keg. The table gave us a stable base to shoot from and we could have three people shooting at same time. Jerry was the most avid dog shooter I have ever known. Eventually he had 15 prairie dog rifles and he would take every one of them on our hunts. He never did shoot all of them on any one trip but he had them if he wanted to use a particular rifle on an occasion. I, on the other hand, though that my 5 rifles was more than adequate, it was all I could afford. We spent a lot of time cleaning rifle barrels. Each barrel was cleaned after 50 rounds. We have shot dogs in the middle of nowhere and out of a rancher’s front and back yard. 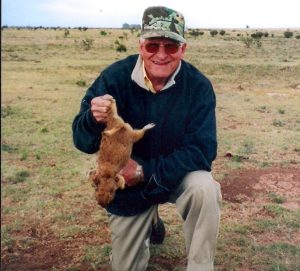 Shooting prairie dogs is one of the best ways to learn how to shoot long distances. Long distance on a prairie dog is 3 or 4 hundred yards. When you are in a 20 to 30 mile per hour wind and the wind blows most of the time, it can be difficult. We would set up the trailer so we shot into the wind or down wind. We were shooting with scopes that you had to estimate the wind drift and hold- over and not with these new scopes that calculate everything for you, dial-in and hold dead on. Recently, I was invited to a rifle range that had a 600 yard range. The gentleman that invited me had a tactical custom .308. After he dialed in the yardage and elevation I was able to hit an 8in. steel plate on the first shot at 300, 400 and 500 yards. On the 600 yd., it was a close miss and after one click on the wind-age I hit the plate with the second shot. Boy! Would I love to have that scope on one of my prairie dog guns? I have read articles about guys that clam they made shots on prairie dogs at 1500 + yards using basically the same guns and scopes that we use but I have yet to be able to see a prairie dog at that range, much less hit one. The longest shots I have made, that I measured, were two consecutive kills at 494 and 496 yards.

Prairie dog shooting is a great way to learn how to become a good shot in all types of hunting. You have to be able to judge distance and know where to hold on a target and it’s a lot more fun than shooting at a paper target. You don’t need to have an arsenal of guns to hunt prairie dogs. If you have one accurate rifle and plenty of good ammo, you can do very well but you will be doing a lot of barrel cleaning. 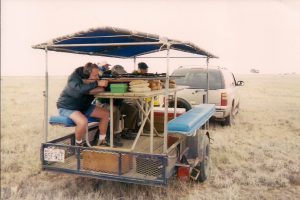