On February 6, 2017 in Hunting Stories, Newsletters 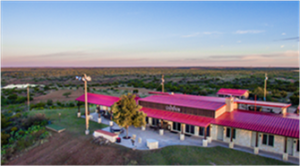 I left for Dallas Wednesday morning. Robert had a company Christmas party Wednesday night so I drove to Dallas Wednesday. Robert jumped an early flight out of Little Rock that arrived at Love field 7:00am, and we were off. Colorado City is approximately 60 miles west of Abilene. When we reached Abilene the temps had dropped to 26′ and snowing. Bridges started icing over with cars sliding into ditches at several overpasses. We did make it without any issues. They met us at the entry gate of Champion Ranch.

The ranch is 2500 acres with the Colorado River running thru it. The lodge sets on a higher ridge that looks over the valley. It has a beautiful setting with skeet shooting available off the back side of the lodge. Each of us had our own room attached to the main lodge. There was a large gathering area with a pool table, shuffle board, 4-5 big screens, 6 swivel recliners, and a bar that is as well stocked as any bar in Little Rock. If you want it, they have it and are ready to serve you. Breakfast included bacon, eggs, sausage, etc. Lunch was equally as good and then dinner (fine, fine, fine). They exceeded our expectation.

This hunt reminded us of a typical African plains game hunt of spot & stalk, even the terrain look similar. The Jeeps are set up with the high racks for a little better view. Our driver was the guide so choice of front shotgun or high rack optional. With the weather at 20′ first morning no high rack for me. The front shotgun position was where I stayed the rest of the hunt.

Robert and I both had bucket list of animals in stages of preference. We quickly found seeing an opportunity to get a shot became challenging. Both male and female Oryx have horns and only males can be harvested. Positively identifying a male in the tall grass and brush was difficult. After you stalked to within 50-75 yards, the window of opportunity quickly shuts before you bust your cover. We made a couple hundred yard stalks with the wind in our favor. Quickly getting educated on which one was male.

Our bucket list of first preference changed to the first opportunity to shoot something. I was interested in a Red Sheep (no verifying needed on male) which we spotted with some other rams. open shot, hammer fell, and so did the ram. Back to chasing Oryx. 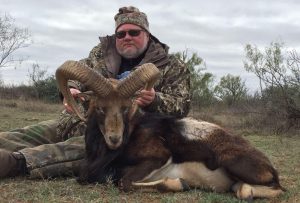 Gary Acord with his Red Sheep

In the meantime Robert was having the issues getting on Oryx. Robert the bow hunter took both rifle and a bow on the jeep. They spotted a NICE solo Fallow deer and stalked within 30 yards. He made a fantastic shot and the Fallow traveled less than 20 yards. The large cactus they used for cover had a friend that put a few needles in after his release and celebration. All worth the reward…Back to chasing Oryx. 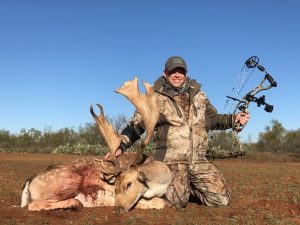 The weather warmed up next day (Saturday) to 45′. Many stalks but still too allusive to make it happen on Oryx for both of us. We were to leave out on Sunday around 12:00. The full Champion Ranch crew was on a mission to help locate Oryx Sunday. Spotters on ridges (3) glassing areas to help in locating. We had seen singles that should or could have been solo bulls but we were never able to get close enough to identify before slipping away. 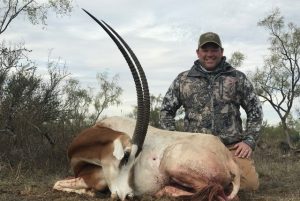 Robert Williams and his Scimitar Oryx

Robert was the first to succeed in getting an Oryx. A single white spot hiding behind a cactus that seemed odd in appearance. They stopped to investigate getting out of the jeep. The white spot almost disappeared behind the cactus. The Oryx had dropped its head as low as possible. Just as you would see a whitetail trying to hide. As they got closer, it got up from a laying position and was quickly identified as a bull. Shot fired thru a small window close to shoulder (hit) not good enough to keep the after burners from kicking in. Not finding quickly they returned to the jeep where they found the ranch owner “PAPA” JOE arriving. “PAPA” JOE became Commando “PAPA” JOE when he became the jeep driver with Robert and Richard “his guide” in the high rack. There was no going around cactus, brush, or any tree less than 4”. Once they spotted the Oryx again it was on full bore. Pedal to the metal and shots fired at every feasible opening. Five rounds in a ¼ mile hit 4 of 5 from neck to butt and two in-between, it finally went down. It will make a beautiful mount but little meat left. A hunt Robert will not forget.

My Oryx was less eventful. One of the spotters from a ridge gave us a location of a single Oryx that we needed to check out. Our travel put us on top of a ridge that overlooked the area, and sure enough it was a bull Oryx just below. I was able to get a good shot off. These animals are tough and even with a deadly shot it tried to keep going. Have to say the second follow up missed butit was done and fell shortly thereafter. After the picture taking we were on the hunt for an Addax. 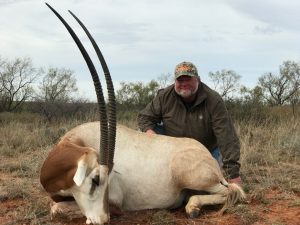 Gary Acord with his Scimitar Oryx

Robert had already made chase on Addax and most had slipped away. I guess the pressure was off after the success on Oryx. We were to meet at the “Appaloosa”. This was located on the opposite side of the ranch. They kept a supply of “adult beverages” and had a round concrete pool. I would call it a party house with a pool. We arrived at the location first and as we made our way to opening up the building a shot rang out. I don’t have all the details on how it went down but Robert found the Addax herd and was able to harvest his Addax. Let’s just say after their arrival adult beverages were heavily absorbed by their group.

Most were to leave out that afternoon including us but the Champion Ranch extended our stay with a fine meal and fellowship for night. We had breakfast with the staff, and they help load all the meat and trophies up in our truck before we said goodbye.

The Champion Ranch is a first class operation. We want to thank them for their donation to the Chapter for the Oryx hunt offering. Look for this year’s banquet offering in April. 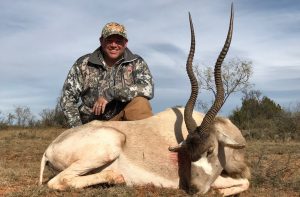 Robert Williams with his Addax