On August 15, 2020 in Hunting Stories, Newsletters

My adventure starts March 14th, 2020 at the SCI banquet for the Little Rock Chapter.  My husband, Mark, and I had been wanting to take a hunt together ever since he taught me how to shoot a gun back in 2014.  We had never had an opportunity for us both to go due to our work schedules and vacation time. Before we left the house we decided that we would look for a hunt that could turn into a small vacation for us.

When we got to the banquet, we looked over the live auction hunts to see our options.

One hunt stood out to us, it was a Hog and Axis Doe hunt.  We were fortunate to talk to Mike and Cathy Wheatley, the owners of MC Outdoor Adventures and Hickory Knoll Ranch before the auction began. They filled us in on more details on the hunt and other possible hunts at their ranch. After talking with them, we knew this would be a perfect hunt for us.  We ended up paying more than retail value of the hunt because we wanted to help support the local chapter.  After the auction was over we talked with the Wheatley’s and told them we would call in the coming weeks to set a date.
A few weeks later we called and set our hunt date for July 24 – 26, 2020.  Mike was extremely helpful in answering all our questions and concerns.

As we drove up to the gates of Hickory Knoll Ranch on July 24th, 2020 excitement filled the truck.  This would be my first hunting experience.  I had practiced with my rifle before the trip and felt confident I would be able to make a clean and ethical kill.

We were greeted by Mike and Cathy Wheatley, Carter Hall, and their dog Gunny.
After we got settled in, we began to visit and discuss the plans for the night.  Mike showed us pictures of the Axis and where we would be hunting in the morning.  Then he showed us the layout of their property on the map and where we would be hunting that night for the pigs.  We changed clothes, grabbed our rifles, and loaded into the side by side they called the Wagon.
Cathy would be my guide for the trip.  That night we went to the stand they call Aoudad to hunt for hogs.  She set up a tripod for my rifle to sit on to help hold it steady.  I placed my custom-built AR 15 in 300 Blackout on the tripod.  Cathy explained to me that Mike would come by with the Wagon and lay some feed down shortly, and then at 7pm the feeder would go off.

When the first group of hogs came out from the left, Cathy whispered to me, “Pick one, follow it until you can take your shot.”  She also reminded me where to aim, right by the ear.  I picked my pig, took a deep breath, and pulled the trigger. PIG DOWN! Its legs started shaking immediately.  Heart racing, I turned to my left and looked at her.  She gave me a fist bump.

She told me to keep watching it, as she has seen them get up and run.  As I watched my pig, her feet continued to shake.  After a minute or so they stopped.  This was my first hunting shot to take, and my first kill ever.

At 8:25pm I thought that would be it for the night, until a second group of pigs came out from the left.  At first all I saw were baby pigs, and they began eating corn.   I waited for the female hogs to come out.  I would be able to shoot the mom when we saw one.  A few minutes later we saw two females come out. Cathy told me again, “Pick one of the bigger ones and aim at the ear.”  I picked my pig.  They were about to leave when I got my shot.  The pig immediately fell.  Then the legs started shaking.  I kept watching through my scope to make sure she did not get up.

Heart racing again, we gave each other fist bumps.  We let Mike know I had gotten another pig and we were ready to be picked up.  Cathy told me that the second pig was probably 100 pounds, but we would wait and weigh them when we got back to the lodge.

The next morning, we woke up at 5 am and loaded into the Wagon at 5:30. Cathy and I went to the Protein 1 stand. We saw several White-tail Deer and a few Axis came out from our right. Unfortunately, I did not get to take a shot as the Axis got spooked and ran off.
That evening, we set out to try one more time to get an Axis. Cathy and I went to the Hay Barn Stand. This was a ground blind that was metal and larger than the others we had hunted.
Because it was larger, we did not need to be as careful when talking. Mike came by and laid some corn down just as he did our first night. Several White-tail Deer came to the feeder and began to eat. Then to my left in the tree line I saw some deer. I asked Cathy if they were White-tail because it was hard to see. She looked through her binoculars and said, “Those are Axis.” I got ready and started looking through my scope so I could see better. We saw three Axis, two small ones and a buck. It took us a few minutes to see the buttons on one of them, so I knew I would not be able to shoot that one. The other was a doe and I started looking closer. Cathy told me she may be too small, but to keep looking. Several minutes later, she called Mike letting him know what we were looking at and telling him the doe was really small. He gave us the go head to take the shot.
At this point, the doe was behind the feeder. Unable to take a shot, I kept on her and moved with her. She finally moved to the right of the feeder giving me a better opportunity. Each time I was about to pull the trigger a White-tail buck would bend down, and his antlers would block my shot. A few minutes later he moved far enough away, I pulled the trigger. All the deer in the area scattered. I looked at Cathy. “Did you see her jump?” Cathy asked me. I told her I only saw the deer scatter. This being my first deer to kill, she told me that was a good thing. It was about 110 yards away. Cathy called Mike and told him I got her and to bring Gunny, to help track her down.

Once Mike and Gunny pulled up, Gunny went straight to work.  He found the doe about 50 yards away in the trees.  We got her out with no problem.

When we got back to the Lodge we took her to the skinning shed. She weighed 57 pounds. 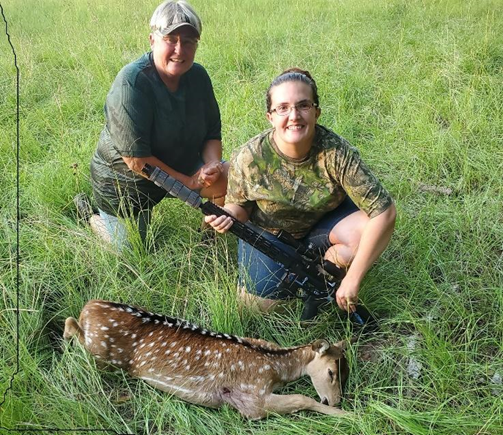 This was a great first hunting experience for me.  Mike and Cathy Wheatley, and Carter Hall made this a fun experience.  The food was great, and the company was even better.  We formed some great friendships.  We highly recommend MC Outdoor Adventures and we are looking forward to our next adventure there.