We left David & Nancy in South Africa and flew to Zimbabwe. George Parkin met us at the airport in Bulawayo and drove us 80 km to his ranch in Nyamandhlovu. We would stay in his home and hunt his and neighboring ranches. We shared his home and ate with his lovely family. The first night I asked for scotch and soda. He had the scotch but not the soda, but what he did have was a pump the converted plain water into something very similar to soda. For our first meal we had a delicious roast. We asked what we were eating, and they told us Zebra. 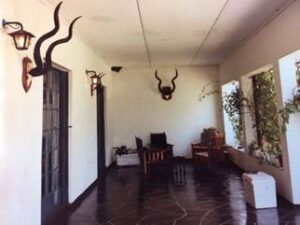 We went for Eland the first day. We drove off the black top road onto very sandy soil. Any animal that crossed this road would leave fresh tracks for us to follow. We soon found fresh tracks of two bull Eland. We tracked the animals for a couple of hours. The Eland circled before bedding down so they could watch their tracks. They saw us and ran.

On the way back to the ranch, we found an Impala that George judged to have 23-inch horn. I took this gold medal Impala which measured 23 ½ inches. George was the best judge of animals that I had ever hunted with.

The next day went to the same place looking for Eland tracks. We found fresh tracks and followed. After a few hours the tracks left our hunting area and entered government land.

We had to stop. On our way back to the ranch, George spotted a Reedbuck laying in a grassy field. All you could see was his neck and head. It was a fine trophy. 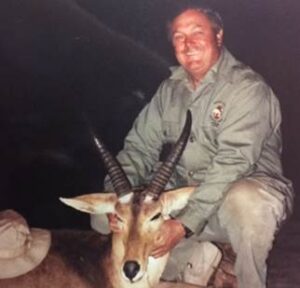 Day three we tried again for Eland, but again we tracked the Eland until they left our hunting area. We found a Sable on the way back to the ranch, but it was not in our hunting area either. 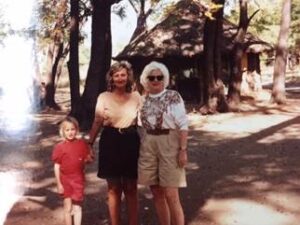 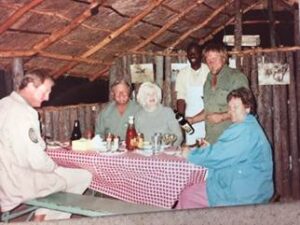 I wanted a Leopard, and West Nicholson was the best area for Leopard.  George had a tented camp there. George and his family, a couple of their friends and Marilynn and I loaded up and drove 2 ½ hours to his tented camp. We wanted to shoot Impala for bait. Impala were plentiful, and I shot a couple. We cut them up and hung several baits. He had someone who would check the baits each day and call in a report. The hunting turned out to be very good. While we were there, we shot a beautiful Sable. It was nearly dark when George spotted the Sable. I had trouble finding it in my scope. The Sable went down, but it was not a well-placed shot. We had to follow up to finish the kill. 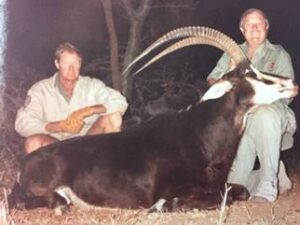 With the Leopard bait hung, we returned to the ranch. I wanted a warthog. George’s friend Martin lived a short distance down the road from George and had lots of Warthogs on his property. We drove through his gate, and before we got to his house, we saw a nice Warthog. That was easy. Martin invited us to dinner that night.

George had a bad scar on his right thigh. George’s family and Martin’s family had gone on an overnight fishing trip on the Zambezi River.

At dark, a wind blew in and started moving their boats. George waded into the water about knee deep to secure the boats. He was attacked by a giant crocodile. It had grabbed his right thigh and was dragging him to deep water. Martin went into the water and tried to pull George away from the crocodile. The crocodile reached out with his paw and brushed Martin away. He then pulled George under the water.

When they surfaced again, Martin dove onto the back of the crocodile. The surprised crocodile released George. Martin said that it was like diving onto a dining room table. They both got out of the river safely. George needed skin grafts to close the wound on his leg.

George had been a policeman in Victoria Falls before the communist revolution. He and Martin both fought for Rhodesian government. Martin was a famous sniper during the fighting. A few years after we left the Zimbabwe government assassinated Martin. They attacked his home. A firefight broke out. Then, they set his house on fire. When he came out, they hacked him to death with machetes. A couple of years later, they shot his mother as she went to the mailbox in front of her home. 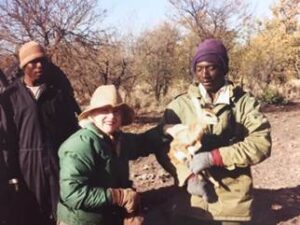 MARILYNN AND THE YOUNG STEENBOCK

I shot twelve animals on this safari. The two most remember were the Eland and the Kudu. We had tracked Eland for five days and had not got a shot. On the sixth try, our luck changed. Like the five times before, we drove down the sandy road looking for tracks. We found the tracks of a large heard. We started following. Everything went our way. We encountered a small heard of female Kudu. We stopped, and they passed with out spooking. We almost walked into the heard that was bedded down in tall grass.

I do not remember what stopped us. We were standing still and looking, when a female Eland raised her head out of the tall grass. She was 20 yards away and trying to get our scent. George whispered: “I know you do not want a female, but if she spooks the whole heard will run.” So, I put my rifle on the shooting sticks and took a careful aim at her neck. She was dead. At the shot, the whole heard stood up. The heard bull trotted toward us and stopped no more than ten yards from us and looked. I was still on the shooting sticks. I slowly moved the cross hairs to just below his chin and squeezed the trigger. I had two Eland on the ground.

My thoughts were what do we do now? We have two huge animals on the ground. How do we get then into the safari vehicle? George had a plan. He had a large rubber mat in the back of the safari vehicle. We placed the rubber mat next to the female and rolled her onto to mat, hooked a chain to the vehicle and drug her to a tree with a large limb about eight feet off the ground. He hung a pulley on the limb and used his winch to lift the animal into the vehicle. This was repeated with the bull. We had quite a load.

The Kudu hunt was near the end of our hunt. In the evening we drove out in his back yard. There were a lot of green shrubs. We immediately started seeing Kudo. Very good Kudo. I had asked for 55-inch Kudu. We saw a couple that he knew were over 50-inch that we passed on. I had asked for a widespread on the horns. He saw one that he thought would go 60-inch, but it had a narrow spread. I said no. Then we found my Kuku. 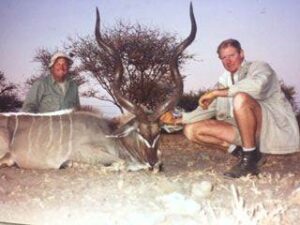 George received updates from his man in West Nicholas about the Leopard baits. No luck.

In addition to the animals already mentioned, I took the following animals: Tsessebe, Southern Duiker, Steenbock, Blue Wildebeest and a Zebra. The cost of the 14-day hunt was around $12,000.00. 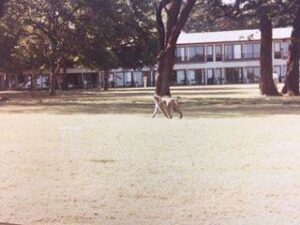 The first night we visited the tree house bar to watch animals. 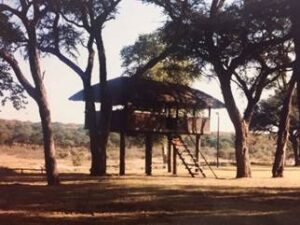 We were enjoying adult beverages and watching Elephants drink from a water hole just the other side of a molt. There were two young bulls who got into a shoving match to see who was boss. We felt safe with the molt separating the park from the resort. We watch until it got dark. As it turned out we were not as safe as we thought. A couple who had been watching the Elephants decided to climb down the steps and return to their room. They found that they were trapped inside the tree house. An elephant had walked down the driveway to feed on the Marula fruit that had fallen from the trees. The bartender called security, and they came with a jeep to drive the Elephants away. We took this opportunity to return to our room. 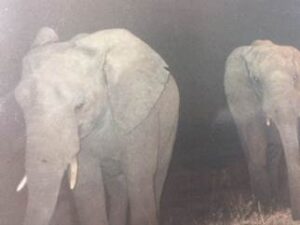 ELEPHANTS AT THE BOTTOM OF STAIRS

The next morning, I went to the restaurant in the hotel to get coffee and Danish

rolls. Marilynn heard a knock at the door. She went to the door and there was no one there. It happened again, and again when she opened the door there was no one there. She listened. The knock was coming from the balcony door. See looked out window to see monkey knocking on the door. The monkey was looking for a handout. When I returned to our room, Marilynn told me about the monkey knocking on the balcony door. When we checked into the Hwange Safari Lodge, they warned us not to leave any doors or window open. The monkeys will come in a make a mess. We could not resist the temptation.  We very carefully fed the monkey. 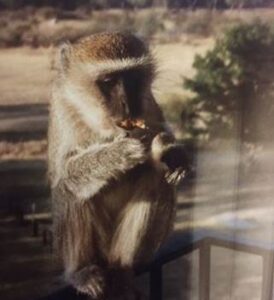 We had a great time game viewing from the lawn of the Hwange Safari Lodge. There were lawn chairs near the molt separating the lodge from the animals. A few weeks after we returned to Little Rock Bryan Gamble and Katie Curk were setting the same chairs hosting the Today Show. 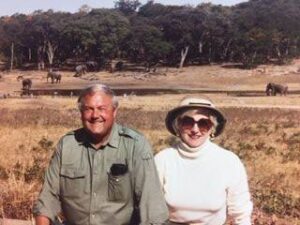 After two nights at Hwange we moved to Victoria Falls for one night at the famous Victoria Falls Hotel. There were newer hotels in Vic Falls, like were we stayed on our first trip, but we wanted the historic value. We visited Victoria Falls in 1990 with Martha and Larry Rider after our hunt in Namibia. 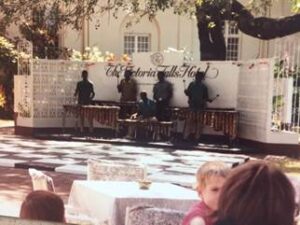 The falls were just as magnificent as before, but park along the falls had deteriorated some. It is still one of the seven wonders of the natural world. 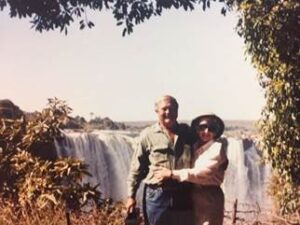