Member Hunt – Goats on the Dillinger

Member Hunt – Goats on the Dillinger

Reflections On Past Adventures

GOATS ON THE DILLINGER
By Larry Rider 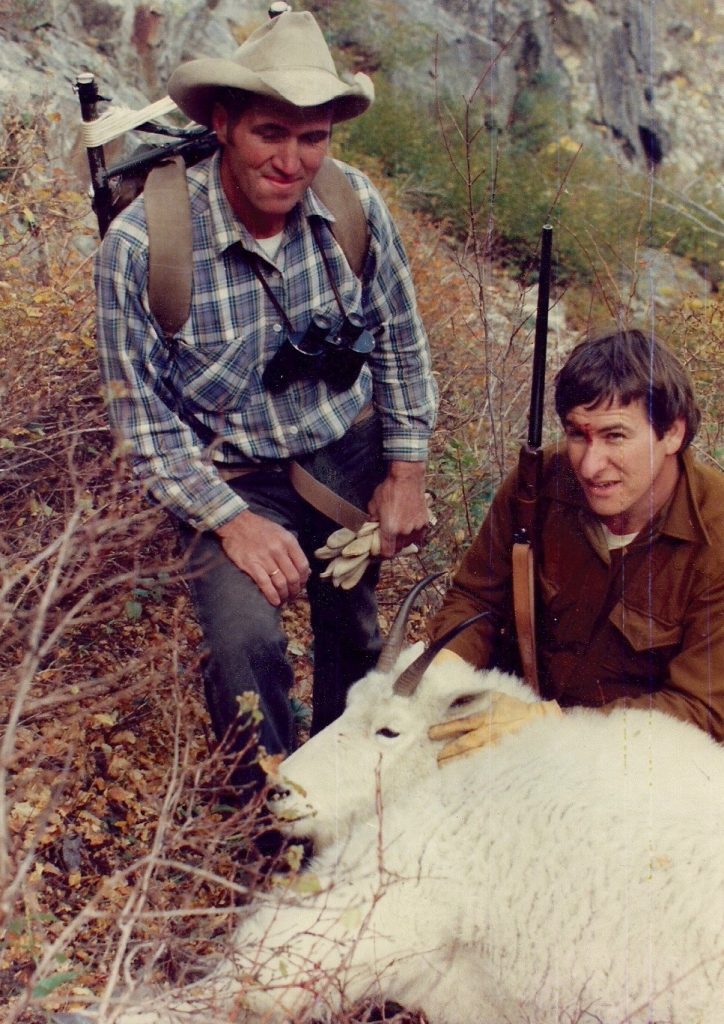 As Zeke pulled the boat ashore, I was looking forward to the hunt with great enthusiasm.  We had just come about eight miles up the Salmon River to Dillinger Creek, where we would begin our 3,000 foot clime for mountain goat.  We would climb about two miles up from the river, following the creek, before starting up the talus slopes where we would begin looking for goats.  I was hunting with Zeke West out of White Water Ranch which is in the Salmon River Breaks Primitive Area of Idaho.  The third member of our group was Jim Linville who was a smoke-jumper with the U.S. Forrest Service.  Jim worked for Zeke in the off season as a guide and packer.  I knew the hunt would be rough, and it wasn’t long before I was proven right.  Our first breather came after the two mile climb at the foot of the talus slope, while we glassed for goats.  As we were glassing, I started thinking, how lucky I was to have drawn the goat permit.  There were only two goat permits for that region, one for residents and one for non-residents.

Not spotting any goats, we started up the slope.  While Jim helped me struggle up the hill, Zeke had climbed on ahead to try and spot game.  Zeke had disappeared above us, when Jim said excitedly, “there’s a goat above us”.  About 125 yards above us was a goat walking along a trail.  By the time I recognized it was a good billy and decided to take him, he had walked out on a rock ledge and was looking down at us, straight down my gun barrel.  There was some light brush in front of his chest, so I waited for him to move for a better shot.  That opportunity never came, as he turned and walked over a rise and was gone.  While we were climbing up to where the goat had been, I was kicking myself mentally because I had not taken a shot when I had a the chance.  We met Zeke coming down the same trail the goat was on.  He said he had come face to face with the goat on the trail and decided it was best to give him the right-of way.  A big billy can be very mean when he’s aggravated.  What Zeke told me next didn’t make me feel any better about letting that goat get away.  He said the billy had horns ten inches or better and would have gone in the record book and that he probably would have been the new number one or number two state record.  We tried to locate the billy again but time ran out on us.  We had to be back at the boat in time to get back down the river before dark.

The next day we fished the river for Steelhead and Dolly Varden trout so I could let my sore muscles rest.  The third day we were back a Dillinger Creek looking for my goat.  We had already climbed past the point where we had seen the big billy the first day when we spotted two goats high above us. One was a good billy and the other a younger goat.  We couldn’t make a stalk straight up the hill toward the goats without being seen.  The only stalk we could make and remain out of sight of the goats was to climb up the face of a rock cliff to our left, which would flank the goats.  By the time we reached the top of the ridge, which would have put us within shooting range, the goats had moved around the hill and out of sight.  We continued to climb in the direction we had last seen the goats.  Zeke was in the lead when he motioned for me to come up in a hurry.  The goats were heading up the next ridge as I found a rest for my rifle.  The larger of the two goats never did show himself for a shot before they again disappeared around the hill, which started the same procedure all over again.  We never saw those two goats again.

We changed our direction and climbed to the top of another ridge to see if we could spot some other goats.  We eased up to the top and looked over the ridge.  There was a billy standing on the side of the hill across the canyon.  He wasn’t very large, so we decided to watch him while we ate our lunch that we hadn’t had time to eat earlier.  We hadn’t finished our lunch, when Jim spotted two goats down in the canyon to our right about 250 yards.  A large goat and a smaller goat were standing in some brush at the head of a talus slope.  Zeke said the larger goat was a good goat and much better than the billy across the canyon.  It was getting late on the last day of the hunt, so it was now or never.  As the 7mm echoed across the canyon, the goat stood there for a second or two and then shook himself like an animal does when they shake water off.  Zeke suggested I shoot again.  I think he thought I had missed.  Just as I was assuring him the goat was not going anywhere; it reared up on its hind legs and fell over backwards on its back.  The 150 grain Nosler had done its job.  Shooting downhill, the high shoulder shot exited low in the opposite shoulder.  After a few quick pictures, Zeke field dressed the goat.  We didn’t have time to cape out the goat so he decided to cut the goat in half.  He and Jim packed it out.  That boat sure was a welcome sight.  Zeke said that was one of the toughest packs he had made.

As I reflect back on this hunt, some 42 years later, I can still see, in my minds-eye, that big goat looking down at me, from that rock ledge and the fact I didn’t take that shot, still haunts me today and will till the day I die.