Dr. Jim Penney purchased the 2 hour 4 man Heli Hog Hunt at the 2015 Fundraiser.  I was fortunate enough to be invited to join him, Rick Gore and John Morrell for the hunt.  You don’t want to hunt West Texas in the summer time, and for this hunt you would like to go after the leaves have fallen.  Jim chose March 5, 2016 for our hunt.  I do not think they have four seasons.  There were plenty of leaves on the trees.

Our hunt took place in Brownwood, Texas which is about 127 miles southwest of Fort Worth.  Brownwood was the largest Army training camp in the USA during WWII.  We met our crew and helicopter at the local airport at 7:00am on Saturday morning.   We were given safety instructions and provided with AR-15 rifles and several fully loaded magazines. 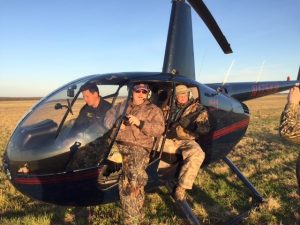 In the picture to the left, Jim and John are in the recommended shooting positions, leaning out of the helicopter with your feet on the struts. (NOT ME)  You do not aim and shoot.  The thrust of the rotor makes the bullets do funny stuff.  They told us to do a lot of shooting and keep shooting.  Fully auto would have been better. 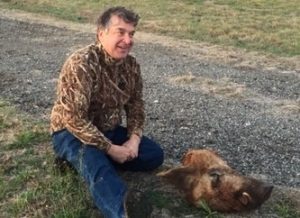 Heli hog hunting is quite a thrill.  It did not feel like we were flying very fast when we going to the first ranch.  The instruments said we were traveling at 120 knots.  I thought I would test the wind with my hand and almost lost my arm.  Our pilot was very skilled and an experienced hog hunter.  He would hover inches above a Spanish Oak tree to flush out a stubborn hog and then swing out in pursuit with us in good shooting position.  Before returning to the airport, our pilot landed the helicopter so we could retrieve the hogs.  Jim and Rick are meat hunters.  At the end of the hunt we butchered the hogs, packed them in ice and drove 8 hours back to Little Rock. I think you should add a Heli-Hog-Hunt to your “bucket list”. 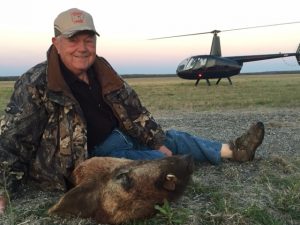