It was early morning on June 3, 2019 and I was sitting in the North Fork River where it joins the White River.  A gentle breeze was flowing with the river dropping the temperature below 60 degrees.  I could see our objective swimming in the crystal-clear water below.  I was with three friends from Texas who had never caught a German Brown Trout.  Larry Rider was in my boat, and his stepson, Butch West, was in another boat with his brother-in-law Jack Hopkins.

As luck would have it, I caught the first Brown Trout, and it was a nice one.  We fished this spot for an hour and a half.  I caught a second Brown Trout and Butch caught two as well.  My largest was 18” and his largest was 17”.  All were released back into the river.  Larry and Jack failed to catch a Brown Trout.  We then moved into the White River where the fishing would pick up with the adding of Rainbow Trout.

This trip began at the March 3, 2019 Fundraiser for the Arkansas Chapter of SCI.  Larry and his wife Martha were with me and my wife Marilynn at the Banquet.  Mike Harrison of the Norfork Trout Dock had donated three trout fishing trips to be auctioned off during the Fundraiser.  Larry suggested buying two trips.  Each included:

*Lodging not included. Fishermen must stay a minimum of two nights at the resort at regular price.  Our price was $165/night plus tax for four people. 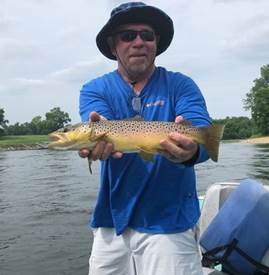 When I booked our trip, I explained how I had bought the trips at the SCI Fundraiser and I was bringing three fishermen from Texas who had never trout fished in Arkansas and had never caught a German Brown Trout. They assured me that they could solve their problem.

There is no limit to the number of Rainbow Trout you catch, but you can only keep five.  The guide can keep five trout for the shore lunch, but he cannot give you his limit.  The pace of fishing picked up quickly when we started fishing in the White River.  My guide, Kenny Moody, took us upriver.  The other guide, Vic Jones, took his fishermen down river.  Larry and I probably caught 15 Rainbow Trout each by 11:30, when we met with our friends for our shore lunch.  The guides had picked a shady spot on the bank of the White River for our chairs.  There was enough room for them to cook and serve our lunch.  Lunch consisted of a heaping skillet of hash brown potatoes, plenty of fried trout, baked beans, and a salad.  Butch had caught the most number of fish.  He and Jack show off their catch that was used for lunch. 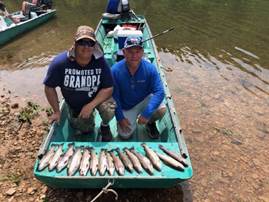 After lunch we continued fishing for Rainbow Trout until about 2:30, and then we headed back to the North Fork.  Our guides were not going to give up on catching Brown Trout. 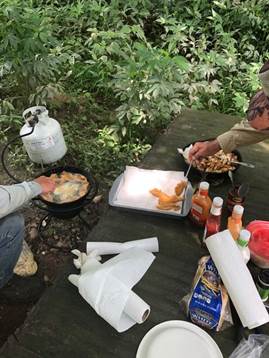 Sure enough, Larry caught his 17” Brown Trout and Butch caught his third Brown Trout.  Now it was time to go to our cabin and celebrate with an adult beverage.

Our cabin was a nice two-bedroom, one bath with a large living room kitchen combination.  It had central a/c and a large TV.  There was a large porch overlooking the White River.  For larger groups there was a walkout basement with a bath and additional bedrooms.

For our evening meals, we drove 15 miles into Mountain Home, a town of 12,253 with a good selection of restaurants.  Sunday night we ate at Chili’s.  Monday night we chose a local Mexican restaurant that had excellent service and food.

This time we all fished down river for Rainbow Trout.  Fishing was much better down river.  There were times when I was catching trout as fast as I could release one fish and rebait.  I was convinced that this was the reason Butch had caught more fish than I did the first day.  WRONG.  Butch said he was averaging 12 trout per hour.  He was just the better fisherman. 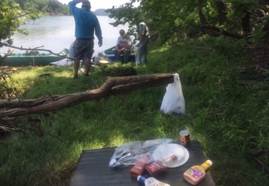 Our guides found an even better spot for our shore lunch down river.  The menu was the same, a large skillet of hash brown potatoes, plenty of fried fish from Butch, baked beans and salad.  After lunch we continued to fish down river from the dock.  At 2:30 we headed back to the North Fork of the White River to fish for Brown Trout.  The high lights of the afternoon were Butch catching his 5th Brown Trout and Larry catching a Golden Rainbow Trout. 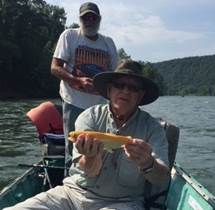 Due to flood damage to the Jim Hinkle State Fish Hatchery in 2017 AGFC started buying trout from a private fish farm in Missouri.  On May 6 of this year the AGFC stocked 7,500 Rainbow Trout, including less than 100 Golden Rainbow, in the White River below Bull Shoals Dam to the North Fork River.

The trip was an outstanding success.  The whole trip, Butch would say “I cannot believe the fishing.  I never expected to catch this many trout.”  Arkansas trout fishing is on his to-do list for next year.