After purchasing the pheasant hunt with Pheasant City Lodge in Wessington, SD at the 2015 SCI Arkansas dinner, I contacted Pheasant City Lodge for information and booking. My buddy Kyle Keller had agreed to go with me. After speaking with the lodge, we decided to hunt the last week of October. Since just the two of us were going and our schedules were flexible, we booked hunting days of Wednesday-Friday. The hunt included everything, to include ammunition, and what few questions we had about plugs (not required) and lead shot (furnished) were quickly answered.

We decided to drive up, stopping to spend one night in Sioux City, IA so we would not have to find the lodge after dark. We left Greenbrier on Monday morning and arrived at the hotel just before dark. I had reserved rooms at the Americana Lodge and Suites in South Sioux City, which was right off the interstate. The rooms were adequate and the hotel was near several restaurants. We checked in, and then found a nearby steakhouse. Bellies full and a long day on the road guaranteed a good night’s sleep.

We rose early on Tuesday and after a surprisingly good breakfast in the lobby, headed north. We arrived about four hours later in Mitchell, SD and quickly found Cabela’s. The huge inflatable pheasant in the parking lot gave it away. 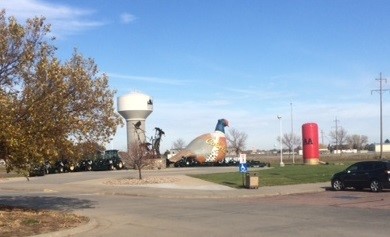 We spent a couple of hours browsing the store and left poorer moneywise, but rich in new gear and souvenirs. We grabbed a burger and fries at Culver’s next door then set out to find Pheasant City Lodge.

About an hour later, we pulled into the lodge parking lot and were greeted by Kristie Teveldal and her mother. After a tour of the lodge, we were shown our room and then lugged our gear, much of it anyway, from the truck. After a cup of coffee and some small talk, we decided to hone our shooting skill on the clays range. It was just outside the lodge overlooking a large pond. Many of the early birds flew unscathed, but after a box of shells apiece, enough were breaking that we thought we wouldn’t embarrass ourselves and our home state too badly in the morning. We met Kevin Teveldal and discussed strategy for the next day. Dinner was simple but delicious. 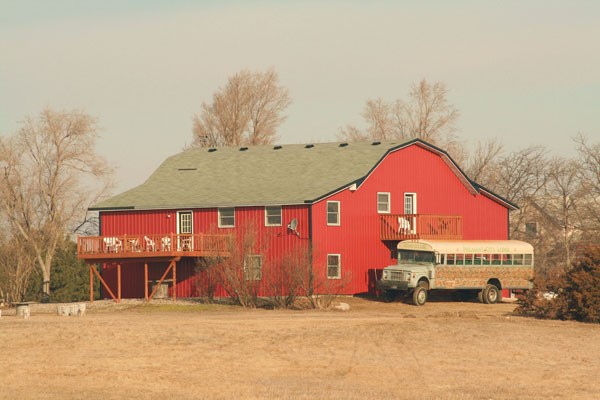 Pheasant City Lodge is a working farm and cattle operation with hunting offered in season. They also raise bird dogs for their use and for sale. The lodge is a large metal building with two stories inside. The rooms have bunk beds and each room has a private bathroom. The kitchen and dining area are on the first floor, along with two guest suites. There is also a large area for hanging outerwear and gun cleaning. Boot dryers were available also, although not needed on our trip. Upstairs had a large lounge area with a refrigerator and table, as well as a couple of card tables. The game area opened to a large deck overlooking the pond and clays range.

The first morning, it was cold and windy. Breakfast was served about 0830. At 1000, we met another group of hunters who had stayed in town and driven out to hunt. Kyle and I were introduced and we all loaded into a four wheel drive bus and headed out. Kevin was our guide and driver. The property has numerous food plots up to two miles long. Most were about 40 yards wide. The strategy was to send two hunters to the end of the plot in the bus to act as blockers, while the rest hunted the food plot to them.

There was no shortage of birds.   The only reason we hunted until lunch was our poor marksmanship, but we managed to kill our limit of three birds each. I’m glad the lodge was supplying the ammo! 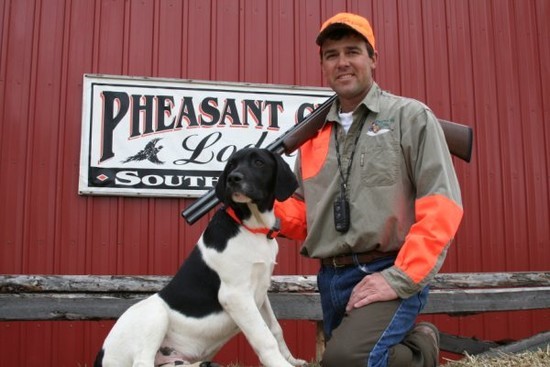 Days two and three found Kyle and me hunting by ourselves with a guide. There was only one other pair of hunters in camp until Friday and they wanted to hunt by themselves. We used the same strategy, but without the blockers many birds flushed from the end of the plots out of range. But with the number of birds present, that had no real effect on our success. The dogs hunted well and our guides did not laugh openly at our misses most of the time. 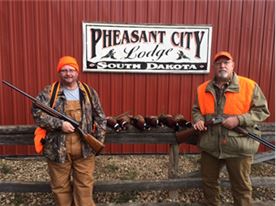 Our birds were still frozen in the ice chest, and we are already talking about another pheasant hunt.

I should note that this was my first pheasant hunt and also my first guided hunt, although I have been on several guided fishing trips. The lodge was comfortable, the food was good, and the hunting was great. The ideal group size is probably six hunters, but they will accommodate groups of any size. The lodge is in the middle of nowhere. If nightlife is important to you, I would suggest staying in Mitchell and making the one hour trip daily, although I don’t know how much nightlife Mitchell provides. The lodge had satellite television and reliable internet. Cell phone service was non-existent inside the lodge and iffy outside, but the lodge’s landline was available. We both enjoyed the experience very much and would go back.