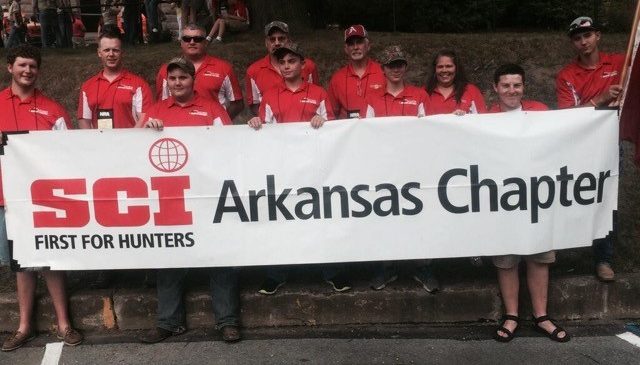 Described by many as one of the “Best Kept Secrets” in youth shooting programs, YHEC teaches young boys and girls shooting and hunting techniques.  Youth are taught the safe, ethical and responsible way to shoot, hunt and enjoy the outdoors.  The program which is open to boys and girls ages 10 to 187, teaches how to shoot and safely handle a rifle, shotgun, muzzle loader and bow.  Youth are also taught many outdoor skills such as hunter safety, how to use a compass, wildlife identification, first aid and survival.  Once a year the State and National YHEC Championships are held to test a youth’s shooting, hunting, and outdoor skills and abilities.

The Safari Club International Chapter in Arkansas sponsored the Senior Ozark Youth Shooting Team from Benton County.  Team members included Austin Abercrombie, Blake Parsley, Dustin Morris, Hogan Bowen and Matthew Harris.  Arkansas YHEC is very proud of the support received by SCI.  SCI has been sponsoring teams to attend the National YHEC Event for over 10 years.  The Support encourages youth and their teams to compete to practice and train harder to win a sponsorship to the National Competition.

Arkansas is very proud of the following Top Teams and Individuals that represented the state at the NRA National Championship.

Also W.T. Morehead from Izard County finished 2nd in the Senior Division of the “Cherokee Run”, an event that tests the ability to hit a variety of targets using primitive weapons such as guns, long bows, spears, knives, tomahawks and sling shots.

Teams to the National Youth Hunter Education Challenge in Arkansas are sponsored by:

YHEC programs for 2016-2017 are forming now.  If you have a boy or girl that would like to be involved with YHEC in Arkansas or you would like to support the YHEC program, contact Gary Jobe at jobepack@hotmail.com.